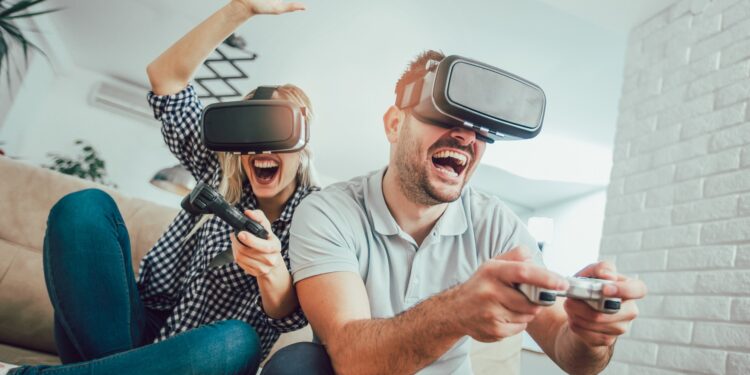 Probably the group of people who weren’t fazed at all by the stay-at-home mandates during the past year is the gamers. Sitting at home in front of the monitor or TV screen for hours and hours is a piece of cake for them. They do that on their own, anyway, pandemic or not. And because of this, the gaming industry emerged as the top moneymaker in the entertainment industry for the year 2020, with a value of USD$162.3 billion.

Along with the advances in computer technology, gaming has come a long way. Now that VR (virtual reality) tech is on the cusp of shaking things up, even more, the way you experience gaming now would be vastly different than from a generation ago. Many changes in the gaming industry have happened in the last few years with the arrival of new techs, and many industries have also embraced dramatic changes when disruptive technologies arrive.

The gaming industry, however, is one of those that had undergone breath-taking changes that made gamers thank the lucky stars they got to experience such transformation. And you know what’s more exciting? There will be more changes to come. ‘You ain’t seen nothing yet,’ as someone once said.

One of the most notable driving forces behind gaming’s evolution is technology. Tech made some games to be so immersive that it can sometimes be jarring to leave that world. Moreover, games now aren’t exclusively for entertainment. They can also be used for educational purposes in different fields. And with the rise of esports, competitive gaming is now a major sports event, with the top ten esports prize pool totaling more than USD$90 million in 2020.

Searches for ‘How to Become a Professional Gamer‘ must have spiked after those events.

From simple electronic games to the advent of arcade games to the current hyper-immersive games, the industry has made tremendous advances. Here are ways on how gaming has evolved:

The development of 3D graphics made gaming more immersive and realistic, compared with two-dimensional graphics generations ago. The arrival of 3D graphics and other special effects made new possible ways of creating realistic texture and computing physical characteristics. 3D graphics also made in-game interaction between objects possible.

Modern games with a realistically designed environment with details rendered beautifully let players be immersed in the gaming world.

Big budget games with a large team behind them are now starting to look like blockbuster movies in ‘feel’ and execution-only better. Games are interactive, after all. This means you can make choices for your character. You can choose to have different endings, depending on your decision. According to some critics, the enhanced graphics of modern video games due to the advancement of gaming hardware, plus the complex and gripping storylines, made games too cinematic.

Blurring the line between games and movies can be a double-edged sword. It can ostensibly diminish the games’ value as a legitimate art form on its own. Gamers don’t see this as a problem, though. This cinematic experience led to the improvement of storylines, with first-rate writers being hired as part of the game’s development team.

Games such as Bioshock, the Mass Effect series, The Last of Us, and others have stories that are more compelling and more nuanced than some of the best movies that have been released in recent years.

GameStop and other brick-and-mortar games retailers have been slowly losing their significance in the past few years. This is due to the rise of online game retailers like Steam, Origin, and others. Sony and Microsoft also have their online stores for their consoles, the Xbox and PlayStation. With these digital stores, pre-ordering is now the name of the game. That is if you want a copy of the game on its release date.

However, it’s close to impossible to get gaming consoles on the day of its release. Video game companies also release bits of DLCs (downloadable contents) and other features during a game’s lifetime that add more quests or extend its storyline.

Video games now aren’t just for loners. The Internet made it possible for a group of friends or strangers worldwide to play together. They can do missions and quests jointly or do battle with each other. Games like DoTA, WarCraft, Call of Duty, and others allow players to play on teams or individually.

Wearables like AR and VR headsets have further made games immersive. And many feel that the potential for these techs in gaming is enormous. One of the reasons that sped up its development in gaming is the increase of service delivery networks and unified content. This made it possible for cloud servers to stream applications through high-speed mobile networks.

Modern technology is one of the driving forces of gaming’s evolution throughout the years. And with the continuing hardware advancements like powerful graphic cards and AR and VR techs’ addition to gaming, the industry is at the apex of something exciting. More incredible changes are expected in the future.