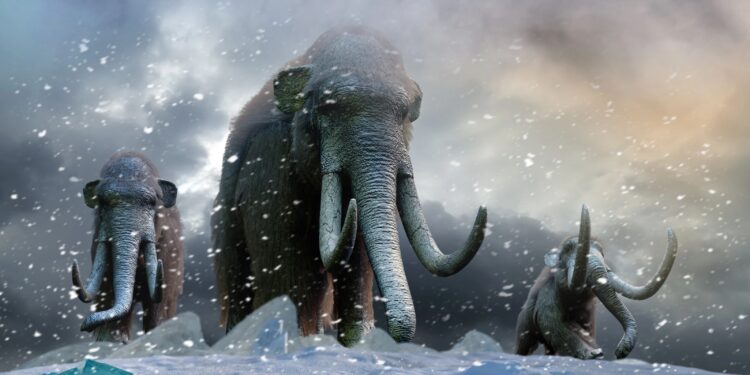 It’s said an elephant never forgets — and neither does Colossal Biosciences when it comes to the pachyderms’ distant relative, the woolly mammoth. The Texas-based biotechnology and genetic engineering company is collaborating with a renowned Harvard scientist to de-extinct the long-gone beast, with the loftier goal of saving the planet in the meantime.

“Our goal is not to just bring back the mammoth; that’s a feat in itself,” says Ben Lamm, CEO of Colossal Biosciences. “It’s for the successful re-wilding of mammoths. If you take that tool kit, you have all the tools at your disposal to prevent extinction or to bring back critically endangered species.”

Ambitious undertakings need great teams. Assisting Lamm in his mission to revive the great beast is famed geneticist George Church. As Colossal’s co-founder, Church brings a wealth of experience to the company. “I reached out to George Church at Harvard University a little over three-and-a-half years ago,” Lamm told CBS News. “His passion and his tone changed completely when he started talking about de-extinction and the mammoth.”

Colossal Biosciences will be using a technology called CRISPR — clustered regularly interspaced short palindromic repeats — to bring back the gargantuan creature. The company plans to use the Asian elephant as a starting point for the resurrection. Using genome editing technology, Colossal will modify the genome sequence of the Asian elephant, as it’s the closest living biological (phylogenetic) relative to the woolly mammoth. The result would essentially be a mammoth-elephant hybrid.

READ:  Which Should You Trade - Stocks or Forex

“For the first part, we actually have sequenced genomes from various mammoths’ DNA that’s been collected over the years,” Lamm told CBS News. “That process is to really understand the genome and how it relates to its closest phylogenetic relative being the Asian elephant. The Asian elephant is actually 99.6% genetically identical to the woolly mammoth.”

Under Church’s leadership, the company will be taking on a massive task — something he’s been working toward for quite a while. Back in 2017, Church and his colleagues added 45 genomes to the DNA of the Asian elephant in a bid to recreate the DNA of the woolly mammoth. Having concluded a sponsored research agreement with Colossal, he will now be able to continue his groundbreaking research from the comfort of his lab.

Speeding up Evolution and Slowing Down Extinction

Church’s aims can be best described as speeding up evolution. Church and his colleagues are also credited with a record-breaking edit of 62 genes in pig embryos as they tried to create organs fit for transplanting into humans.

Given that nearly 1 million animal and plant species are on the brink of extinction, the mammoth project might be the only chance humanity has to prevent ecological devastation

If successful, Church’s process will not only revive extinct species, but may also be used to avoid extinction events in the first place. Lamm calls this “genetic rescue.” This is the process by which the gene pool of endangered species may be expanded through gene editing or sometimes even cloning. In 2021, scientists successfully cloned an endangered species — a black-footed ferret named Elizabeth Ann. The clone was created from frozen DNA in 1988.

However, millions who lapped up the Jurassic Park film franchise must wonder if bringing back dead species is a good idea.

READ:  The Importance of Data Processing

Lamm thinks it is, with the proper precautions. “We are in the world of synthetic biology. These tools exist. It’s hard to put the genie back in the bottle. We need to be really thoughtful about the intended and unintended consequences of our actions,” he told TechCrunch.

According to Colossal, the creation of the woolly mammoth may help in the fight against climate change. The team has already picked out a spot in Siberia where the reanimated critters can congregate. The woolly mammoths will knock over trees, creating grasslands that act as a natural storage device for carbon. As the behemoths walk those grasslands, they’ll pack the snow deeper into the ground. This will create a layer of insulation, thereby preventing the release of greenhouse gases into the atmosphere.

“You could actually lower the temperature of the permafrost anywhere from half a degree to anywhere up to 10 degrees,” said Lamm.

Despite the purported benefits, there are some concerns that reviving extinct species might harm ecosystems, including the spread of novel diseases, altering of landscapes, and engendering existing species.

Colossal’s project is the basis for developing several intellectual properties through the varied application of CRISPR, such as artificial wombs. There are still massive scientific hurdles that need to be surmounted before the wishes of Colossal may be actualized. However, the company has garnered $75 million in funding, which ensures that it has the funds to work toward actualizing its objectives.

And the world won’t have to wait too long to see the results. According to Lamm, “We’re about four to six years away from our first calves.”