iPad Pro or MacBook, Which is Better? 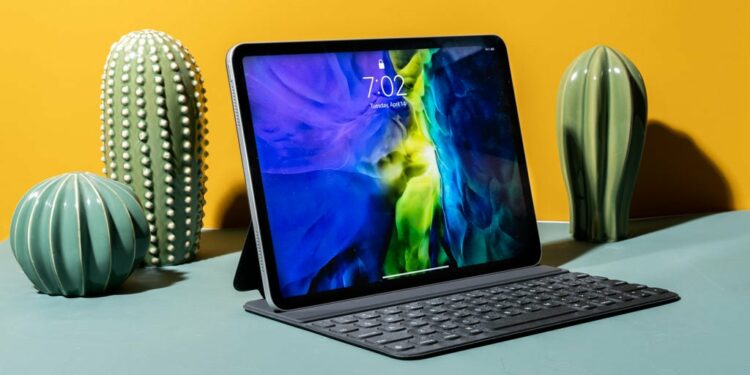 iPad Pro or MacBook? This question has been circling in people’s heads when buying one of these devices.

MacBook is a laptop that was presented in 2006. This device replaced the iBook and 12 inch PowerBook notebook series as a part of the Apple-Intel transition. Today the newest model is the MacBook Air which was released in March of 2020.

iPad Pro is a tablet that was put out in November of 2015. This device has a bigger screen size, larger storage capacity, and better hardware. The latest model is the iPad Pro 12.9 inch which was released in March of 2020.

Both of these devices are high-end and well built externally and internally. But the big question is – which one is better. To ease up the decision we have compared the MacBook Air and iPad Pro 12.9 inch. They are the newest models in their series. To discover their pros and cons, keep on reading!

What’s inside the boxes?

Technical Details of Both Devices

iPad Pro has a bit higher resolution (2732 x 2048 pixels). It has an edge-to-edge Liquid Retina display. Also, it features 3D wide color support and a refresh rate of up to 120 Hz.

MacBook Air also features a Retina display. The display also has a built-in TrueTone system. It detects the ambient light around you and matches its color temperature.

Both of these devices provide sharp details and beautiful colors. Watching your favorite TV shows and films will be like a dream.

iPad Pro has the A12Z Bionic chip. This chip was made to do a really good job while doing high-demand tasks. This tablet is suitable for editing 4K videos and designing 3D models. With the eight-core GPU, you can easily enjoy a high-quality performance. This combined all together makes apps run much faster than before.

Although the new A12Z Bionic chipset is not a major upgrade from the A12X used is previous iPad Pros. It is only 1% better.

Apple made a good choice pairing the processor with Intel’s Iris Plus Graphics. This gave an 80% boost to graphics performance. So playing games and editing videos is much faster.

Overall the iPad Pros processor is one of the most powerful in any mobile device, including most laptops. So in terms of processor potential iPad Pro is better.

Regardless of the storage capacity, the RAM stays the same. iPad Pro – 6 GB of Ram, MacBook Air – 8 GB of RAM.

Judging just by storage the MacBook Air is a better deal. Because comparing the lowest possible storage (iPad Pro – 128 GB, MacBook Air – 256 GB) it costs about 100 dollars less, and you also get a keyboard included.

iPad Pro is made out of aluminum. It comes in two colors – silver and space grey.

On the bottom and top, there are two speakers and the charging port, which is also used as a USB-C headphone jack. On the right side, there are volume controls. And on the top, right side – the power button. 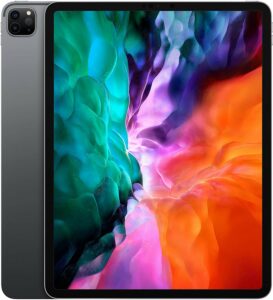 MacBook Air is built out of 100% recycled aluminum. It has more color options to choose from – gold, silver, and space gray.

There are two USB-C ports, that are meant for power and input. On the right, just one port – headphone jack (3.5 mm). This feature is quite surprising because all the newest high-end Apple tablets and mobile phones it’s long gone. 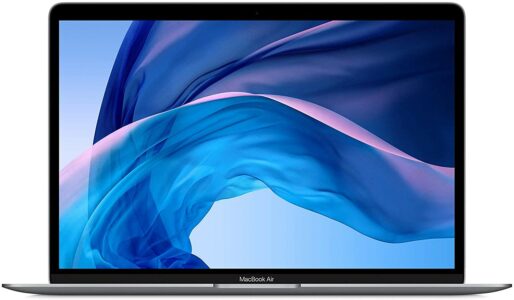 Both devices are pretty similar in their dimensions (iPad Pro is just by 2 cm longer). The bigger difference comes in their weight iPad Pro – 1.4 pounds (0.64 kg), MacBook Air – 2.8 pounds (1.2 kg). These features make the iPad Pro more practical while carrying around. You almost can’t feel the weight change in your bag.

iPad Pro has two cameras on the front and the back. The main camera is located on the left upper side of the tablet. And selfie camera located in the middle while in portrait mode.

The camera positioning is quite similar to the iPhone X. But the megapixel quantity isn’t as much. The wide lens camera has 12 MP and the ultra-wide lens has 10 MP. With these cameras you can take beautiful pictures with sharp details.

Next to them is a LiDAR sensor. LiDAR is a pulsed laser that records the time it takes, allowing it to make a 3D model with better accuracy than a simple camera ever could.

The front camera has 8 MP. This still delivers decent photos and bright colors.

MacBook Air has only one camera that is located on top in the middle. It has a 720 p webcam. This is suitable for zoom, FaceTime, and Skype calls. You can make videos. But If you want to make the video come out well, you need to consider another device.

With no doubt, we can say that iPad Pro has better cameras. If you want to create content iPad Pro will be a much better choice.

iPad Pro has a 9720 mAh battery. If not doing demanding tasks it will last for about 10 hours. So you can easily surf the internet, watch movies all day. And when the day comes to an end you need 2 hours and 30 minutes to charge it from 0% – 100% (with a 30W charger).

MacBook Air has a 5100mAh. This battery lasts seemingly higher – 12 hours. Charging the MacBook Air with the included 30W charger takes about 2 hours and 15 minutes. Doing heavy work or playing games will decrease the battery life to about 7 hours.

iPad Pro has four speakers, two on the bottom and two on top. So it provides stereo audio orientation. The sound can get loud without distorting. The sound quality is good for such a thin tablet.

This device has built-in studio-quality microphones. So while using FaceTime/Zoom, etc., the receiving end will hear you very clear. This is a very good feature for people who like to record things on the go.

If you want to listen to music on headphones you probably will need to by Apple’s USB-C to 3.5mm dongles. Because it only supports USB-C type input.

MacBook Air also has a stereo sound orientation. In the version of 2020, there were added Dolby Atmos playback, something new to the MacBook Air series. This laptop provides a comparatively good sound for its size and thickness. You will see no problem as long as you aren’t in a loud environment.

This laptop has a 3-microphone array. Which sounds clear in videocalls.

MacBook Air still has a 3.5 mm headphone jack. And also the input/power port works as a USB-C headphone jack. So you won’t need to spend more money on 3.5 mm to USB-C dongles.

Overall we think the iPad Pro is better based on the sound and microphone quality. But at the same time, the MacBook Air still has a 3.5 mm headphone jack, which may be more convenient for some people.

READ:  How to Reset AirPods and AirPods Pro A User Guide

Performance vise iPad Pro is suitable for doing more demanding tasks. With it, you can make 3D models, easily edit 4K videos and play games while in the highest graphics.

This device also smoothly runs videos, TV shows, and films. Also, surfing the internet won’t be a problem. It has a 120-hertz refresh rate.

MacBook Air is a bit slower and doesn’t deliver such a smooth journey. Because it only has a 60-hertz refresh rate. But with it, you can do the same things you do with the iPad Pro, but the process won’t be as fast.

So judging by performance iPad Pro is the winner.

What About a Laptop?

Did you know that iPad Pro also serves the purpose of a laptop? Yes, that’s true! Of course, to deliver full laptop experience you should purchase Apple’s magic keyboard.

Apples Magic keyboard is a keyboard case with a trackpad for the iPad Pro 2018 and 2020. 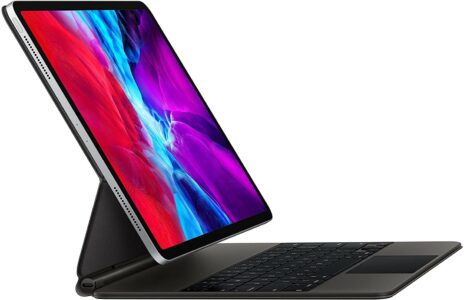 The trackpad works well with multiple touches, you can easily slide through books and recently used pages. Some problems may occur while using Google docs because it hasn’t been updated to go nicely with the iPad OS. It’s really hard to select text.

Some features make the experience with the Magic keyboard more awesome. In the iPad Pro, there is a built-in magnet, that holds the iPad in place. And it sticks to the case in a way that makes the iPad hover. Also, you can adjust the angle of the tablet from 90 degrees to 130 degrees. Although sometimes you may wish to tilt the iPad more.

Comparing the Magic keyboard to the MacBook Air keyboard, it is mostly the same. On both devices, the key travel is only one millimeter. But the differences are that the Magic keyboard’s trackpad is a little bit smaller. Also, this keyboard has a lack of function keys.

The keyboard connects automatically when put on the case. Because on the iPad is installed the Smart connector.

One con may be the price. If you want to buy the iPad Pro 2020 with the Magic keyboard it will cost you about 350 dollars more. But when buying a MacBook Air the keyboard is included in the price.

Who are these devices for?

iPad Pro is mostly seen in the hands of students. Because it provides the needs of a laptop while being a tablet. It’s easy to manage and carry around, you practically can’t feel its weight.

Of course, this tablet is also suitable for people who love to read comics, books, or even recipes. Also, film and game lovers will be pleased with their performance.

MacBook Air also works well for students. As well as book, film, and game lovers can make the most out of it.

What can you do with these devices?

These devices can be used in many ways:

Both devices are an amazing choice for reading e-books. The big screen, good resolution, and high storage capacity options. Especially the iPad Pro feels light in the hand. It will be very comfortable to use while laying down or standing up. These features will make your every day reading more enjoyable.

Gaming will be more enjoyable on the iPad Pro, due to its high framerate (120 FPS) and a better processor. It carries games such as PUBG mobile, Asphalt 8, and Assasin Creed, which are considered one of the most demanding mobile games.

On both devices, you can stream your favorite music. Not just on earphones or headphones, but also on speakers. Both sound smooth and loud.

So this was the article about the pros and cons when choosing between iPad Pro and MacBook. When buying one of these devices think trough the real need of it. These devices won’t be a good choice for little kids.

Overall we think that if you are willing to spend lots of money to buy a device, iPad Pro will be better. Because it outdid MacBook almost in every way. As Apple said ”Your next computer, is not a computer”. We hope this article helps you choose between these two devices.

If you have any comments, drop us a line below! Have a good one.

Home Renovation Trends to Consider for 2021