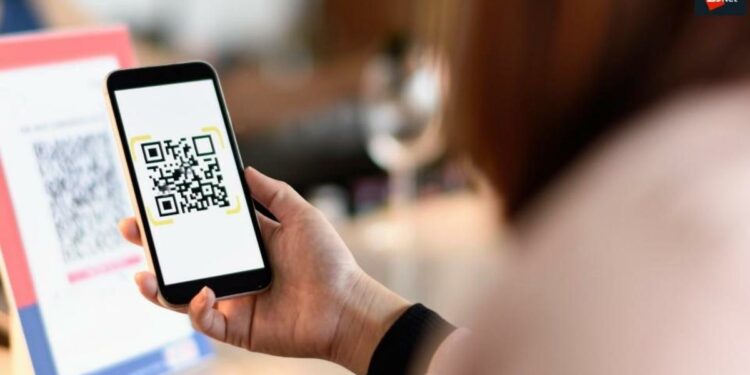 The humble QR code, a predecessor of the barcode and now a new way to pay. First introduced in 1994 by a Japanese company called Denso Wave, the development of the QR code, like many other inventions, stemmed from a problem. The use of barcodes, despite their benefits, were limited by the amount of information they could store. So, to overcome this issue, QR codes were created.

‘QR’ stands for Quick Response and in essence is a 2D code which stores information in two directions – across, and up and down. Since the launch of QR codes, they have been utilised in various industries, originating in automotive and then expanding into marketing, events, fashion, and the hospitality industry. The small black and white patterned square was then adopted as a mobile payment option and grew exponentially in China, accounting for the rapid increase in digital payments.

Now, and in the midst of Covid-19, QR codes are growing in popularity in the US as well as around the world as a safe way to transact for consumers, and for merchants to provide a secure, cost effective, cashless payment infrastructure. This coupled with better internet speed, connectivity and the penetration of smart phone usage, which now has built in-scanning, means QR codes are a contender in the payments space.

According to Statista, in America, 11 million households will scan a QR code by the end of 2020, in comparison to 9.76 million in 2018. Furthermore, according to the ‘How We Shop’ report produced by PYMNTS and PayPal, digital shopping experiences are more favourable as a result of the pandemic and 57% of consumers reported that they now pick merchants partly based on the payments options offered. It goes further to say that digital payments, such as QR codes, provide the convenience consumers are expecting, so much so that 34% said they would not consider making a purchase in store if QR codes were not accepted.

Major retailers such as Dunkin Donut, Target, Walmart, Starbucks, CVS and Macy’s are now embracing QR codes for in-store payments. And PayPal’s QR code payment system, introduced in May this year as a result of the pandemic, enables smaller merchants to accept this form of payment, allowing consumers to pay via their PayPal app by scanning a QR code generated by the seller. This way consumers avoid any touchpoints with POS terminals and merchants can accept digital payments without the investment in hardware.

How do QR code payments work?

QR codes can be scanned from both paper and screens and can be presented in two ways, either by the merchant or the consumer, and the process is fast and straightforward. When entering a store, the consumer can pay for their goods via a unique QR code which is displayed by the merchant and generated by the merchant’s bank or payment service provider. This is known as a static QR code, and consumers scan the QR code using the camera on their smartphones, then enter the payment amount and PIN. The QR code then transmits the consumers data to the issuer, who authorises and submits the funds to the merchants acquiring bank. It is during these stages that the customers PIN is decrypted and encrypted to verify and complete the transaction.

READ:  Easy Tips On How to Transfer And Sync Data Dropbox to Google Drive

To ensure this payment process is frictionless and secure, merchants need to select a payment gateway and acquirer which is PCI compliant, so the consumer’s data always remains secure and data breaches are eliminated. Payment gateway providers and acquirers can work with service providers like MYHSM to achieve this.

Alternatively, the consumer can present a QR code via their own payment app once the merchant has set the transaction amount on their POS system. The merchant then scans the QR code which is linked to the consumers card details and can take the payment.

In the wake of COVID-19, consumers are now embracing and seeking truly contactless and frictionless payment experiences. QR codes provide customers with an additional means to pay in a simple, convenient, and safe manner. Moreover, merchants can quickly and inexpensively offer this flexible and portable payment experience to keep staff and customers socially distanced. There is no lengthy and complex implementation and set up process to contend with, and it offers a reliable and safe way to transact. The codes store unique data, so mistakes are less likely, and the transaction is much faster.

Americans are now beginning to adopt QR code based mobile payments and, as we hopefully return to some normality in the new year, the rise of QR code usage may become more ingrained in the day to day lives of consumers, and we could see this trend flourish further.